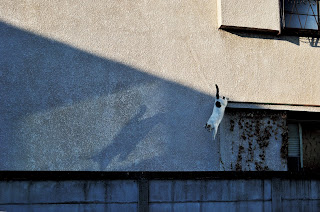 The media, mainly publishers in Japan, often introduce stray cats as free, funny, cute animals living in outdoors. When a publisher features about stray cats in the magazine, they write a title of the article like, ‘Happy cat town of Tokyo,’ ‘Paradise island of cats,’ ‘Joyous encounter with alley cats.’ And plenty of photo books distribute happy looking images of stray cats to people.

I went to a cat photo exhibition before. A jumping cat was on the poster and the flyer. The photo seemed amazing. The tail was held vertically against the blue sky. Nevertheless, I couldn't help but feel uncomfortable in the face. The eyes weren't animated. I didn't know if the cat had jumped pleasantly. Meanwhile, people smiled at the sketchy impression.

It was a great experience, which hanging around in a town to encounter a stray cat, meeting a cat who looks happy, taking some photos, sharing on the internet with cat lovers. However, I gradually became to feel bad. I knew that there are more pitiful stray cats than happy those. When I took ten stray cat photos, I would hide seven miserable cats in my storage then three happy-looking cats would be introduced. It made me feel like I was betraying most of them. I began to think I should take photos which represent them.

I had been taking stray cat photos for six years. Then a conclusion came out. It was an unexpected idea of which all cats shouldn't be in outdoors. They should better relax in a human house. I learned this truth from a sick old cat who was rescued by me.

Some of the people, who feed stray cats or wild birds, are trying to make an ideal circumstance for human and animal coexistence. But this is a wrong idea. All the cities consist of exclusive ways for animals. Asphalt and concrete don't resolve animal excrement. Cat is a non-wildlife animal selected and evolved by human beings. The brain keeps infancy even when the body has grown up. The fact of stray cats is just lost infants who are living in outdoors.

The municipal governments of Japan must have been culling tens of thousands of stray cats every year for more than four decades. The fact exists behind the culture of uncritical admiration of stray cats. Media still contributes to making such a sad culture.

*I post this image of a stray cat leaping downward, as a metaphor of their lives.