One person rescues one cat 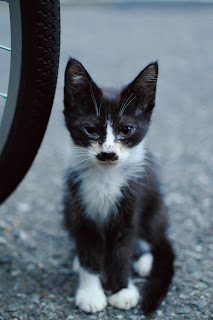 I don't recommend to rescue multiple stray cats at a time. Keeping multiple cats could be a more serious problem for cats when the keeper become poor or sick, and when they died. The ideal activity I think of is one person rescues one cat. If this idea and activities spread widely, stray cats would decrease. Though there are so many stray cats, they are less than humans.

Then we, people of Tokyo, come up against an obstacle that 90 percent of apartments in Tokyo prohibit to keep a pet. I don't think it is right to ignore bad rules. Though I broke the rule twice for rescuing fragile lives, a kitten and a sick old cat, I currently have moved to an apartment which one of 10 percent. Our society should shift. There are not fewer people who tell the reason why they can't keep or rescue a stray cat by the rule. I am eager to let landlords and management companies know that acceptance of keeping a pet means to save a life.