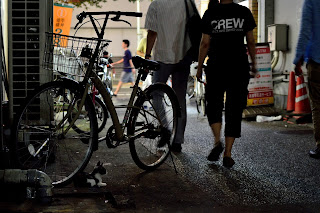 When people find a stray cat, most of them would say, “Cute!” Cats, even they are homeless, look cute when you see from a distance. But if you come close to them and see more carefully, you will find their health problems.

A lot of stray cats have eye problems caused by some infections. It is fewer who have healthy eyes. Their eyes are also easily hurt by fighting. I have a photo of which a stray cat stares with a hollow of the eye socket. It is more than a couple of times that I've met such stray cats.

Old stray cats likely have some decayed teeth. When a stray cat can't close his mouth or wet the lower jaw with saliva, they might have a tooth problem. An old cat, who I rescued from the outdoors, had a deformed jaw with periodontitis, so he had to be extracted all teeth in surgery.

In summers, stray cats suffer from swarms of bloodsucking insects like mosquitos, fleas, ticks. I often been bitten by mosquitoes more than ten places while I was shooting a stray cat for five or six minutes. It happened even though I had applied bug repellent. Their suffering was beyond my imagination. They scratch the itch hardly so their skin, mostly behind the ear, bleed and their hair falls out. Bugs aim just that part.

If you observe stray cats for a few months, you could see a lot of them have loose bowels and will find out that the water which they are drinking isn't hygienic. In case of that a stray cat poop, while I am shooting, I would pick it up using a vinyl bag, but I couldn't do anything when that was diarrhetic.

Cats are genius to pretend they are happy. But people who love them are never deceived. Most of the stray cats aren't in good condition as people call them cute. The disease almost can cure by a veterinarian and keeping them indoors. The people who said the cat cute mostly passed by without stopping. How amazing if the word was a promised future of the cat.