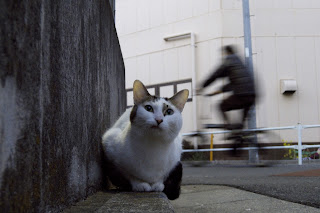 Outdoors in the cities are not appropriate for cats to live.

We, ordinary people, optimistically tend to define stray cats are free, agile, and survive toughly. But it's not true. It's only a wish. In that way, people seem trying to avoid to know an inappropriate matter and relieve themselves from the twinge of conscience.

Most stray cats have serious diseases, such as feline AIDS, feline leukemia, kidney failure, and other infections. They also have a worse physical condition and traumatic experiences by a traffic accident or evil humans. If you take a stray cat to a veterinarian, you will scientifically see how harmed they are.

We see a stray cat grooming in a sunny place. Meanwhile, so many stray cats are wandering from shadow to shadow not to attract human attention. When they can't move anymore with a disease, the municipal government regards the cat as a culling animal. Infants are as well, even though they are healthy.

However, I think the nub of the issue is a thoughtless feeding rather than the way of the municipal government. As a consequence of my six years experience of following stray cats, touching and playing with each other, taking a lot of photos, and encountering the people who feed them, having conversations with the people, I think so.

It is said that a stray cat lives approximately for three to four years. But it probably doesn't count stillbirths, infant deaths, and plenty of stray cats who died at an inconspicuous place.