Person who feeds stray cats is a cat lover or not? 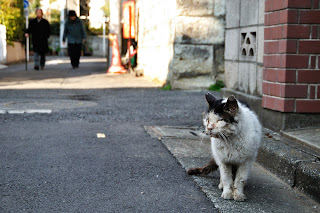 Some of the NPOs engaging in stray cats say that stray cats should be trapped and neutered and returned where they have been. The activity is called TNR. They also say these cats would be taken care of by people who live in the neighborhood.

TNR has the meaning of birth control. But it isn't magic to make stray cats happy. The cats might lose an opportunity to be picked up because of their ear has the mark. They might be left even when they become sick because people would think that the cat has a person who takes care.

I've seen a lot of suffering cats in outdoors whose ear notched. It seems that the people who feed stray cats don't see cats' disease and injury. They often say that they are relieved to hesitate to feed the cats because of the mark. They feed as if feeding is their duty but not to think they have responsibility anything else. Sometimes they seem just enjoying the relationship of master and servant in my eyes. It doesn't seem both the relationships of parent and child or a keeper and a house cat.

The neutered, meaning re-abandoned, cat in outdoors have called a community cat. It sounds calm. Meanwhile, their severe condition continues.